The influence of Jan Decorte on the revival of the performing arts in Flanders is undeniable. The creator, the teacher, the writer, the actor – in short, the artist pur sang in Jan has had a massive impact, on friend and foe.

His dramaturgical perspective is sharp, his texts seem to be simplicity itself, but manage to deeply penetrate the subconscious. As a mentor he has taught countless actors that freedom of thought and confidence in one’s own intuition must be the guiding principle to investigate motives in an independent manner and thus – averse to any psychologisation – reveal and shape the very background of action.

The power of simplicity is accompanied by a compelling interpretation that does not shy away from controversial choices and does not lose itself in a show of virtuosity.
Jan Decorte, together with his soulmate and companion Sigrid Vinks, has paved the way for a new form of theatrical narrative and inspired countless performing artists.

A life in the service of art, enriched by the repetition of important themes that mercilessly show la condition humaine stripped bare, and which does not shy away from wry humour. His writing is almost childlike, a turbo language that is poetic, to the point and without literary frills.

Time and time again it pushes the boundaries, without any concession to contemporary trends. Together, Jan and Sigrid go down the path to an essence that allows them to experience new adventures time and again. They are inextricably linked, and it is therefore only fitting that not only Jan Decorte but also Sigrid Vinks is to receive this Ultima for General Cultural Merit.

Their work also enjoys great recognition internationally, and across generations. “Give Caesar what Caesar is due”! 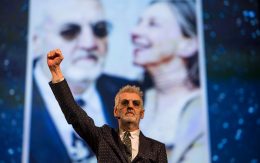