Jan Decorte is writing a new chapter in his series of ‘compression’ of classical plays, called Niks of niks (‘Nothing or Nothing’), a very loose adaptation of Shakespeare’s ‘romantic’ comedy Much Ado About Nothing.
This comedy on the inanity of human goings-on appeared to Decorte to be a logical sequel to his successful Wintervögelchen (2008). Here too, one of the characters appears to die but returns to the land of the living at the end of the play. The two loving couples in this story, around whom everything revolves, are young people into whose laps fall all the wealth and happiness they could desire and who spend their time making each other’s lives miserable. In a life where anything is possible and everything is allowed, boredom and indifference are rife.
Niks of niks is about the pettiness and silliness of people whom we nowadays recognise only too easily. But in this raw comedy, compassion ultimately softens the critique: it ends in marriage. The image of the production presents three deer that turn their backs on us. We look straight into their downy backsides: they are indeed ‘arseholes’, but they still remain ‘Bambis’ that arouse our tenderness against our own better judgement.
Never change a winning team: the complete cast of Wintervögelchen returns for Niks of niks, and they are Waas Gramser, Kris Van Trier and Herwig Ilegems of Compagnie Marius, plus of course Jan Decorte and Sigrid Vinks. As usual, they will divide up the many parts between them and – nimble as they are – will leap from one character to another in the wink of an eye. 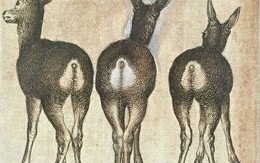