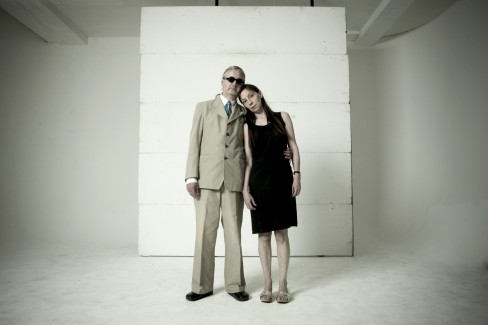 The ‘end-worlds’ of Jan Decorte
In the last few years Jan Decorte has written several ‘rare works’. One of them, dieu& les esprits vivants, opened at the Avignon Festival in July and will be presented at the Kaaitheater in February.   Before this play appears at the Kaaitheater, Jan Decorte will be giving the first performances of two other ‘rare works’. In & (‘and’) he appears onstage himself: the English script starts out from the Crucifixion, the bloody suffering of Christ. But this particular Golgotha stands for all the hills of death in the world throughout the ages. & is a vision of the perpetuity of violent death. In a rich and almost mediaeval language Decorte connects the dead of Napoleon’s battlefields to those of the terror under the Taliban and the Palestinians, and unites in one drop of blood the falling bodies of 9/11 with that of Semira Adamu, ‘in the deadly embrace of a cushion’.  In the second part of the play Sigrid Vinks performs the shorter piece “Burgaudine” (mother-of-pearl) in French. Looking through the eyes of a gigantic goblin, she describes, in a seemingly more light-hearted language, another end-world, a life that is bursting its seams, but in which horror and beauty coincide. The rainbow drips blood.