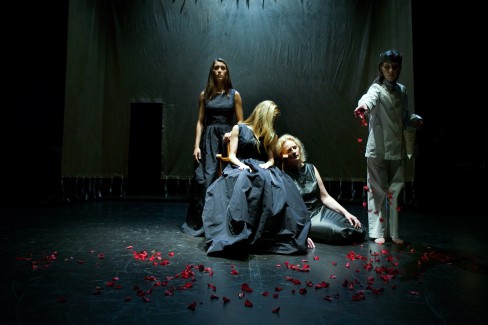 ‘All you need is people who can sing well and play well’
Nowadays Dido and Aeneas is probably one of Henry Purcell’s best-known works. It was written at a time when the opera genre, which was already flourishing in Italy, was by no means well established in England. However, the combination of theatre, music and dance had already developed at the English court in the form of the ‘masque’, a sort of festive, theatrical dance and music spectacular. In addition, there was also a form of semi-opera in England: theatre larded with musical passages and dance intermezzi. Dido and Aeneas is called Purcell’s only true opera because the musical structure encompasses the whole of the dramatic action and also because the leading characters sing all their lines. Musically speaking, in this compact masterpiece Purcell combines a wide range of styles and influences into a coherent entity. In the arias and recitative one hears echoes of Italian opera music, while in the choral passages it is popular tunes that ring out.
Jan Decorte chose this work above all because baroque opera was the birthplace of the entire later tradition of opera. Just as the youthful works of a particular author usually contain all his later themes and his entire vocabulary in the freshest and most powerful form, baroque opera contains the germ and the primary force of the genre that was later to develop so strongly.
Dido and Aeneas tells the story of the short visit the Trojan hero Aeneas made to Carthage and to Dido, the queen of that North African city, in the course of his wanderings. They fall in love and Aeneas, whom Jupiter had given the task of founding a city in Italy – the new Troy, later to be Rome – decided to stay in Carthage. However, a sorceress, an enemy of Dido, sends a spirit in the guise of the messenger-god Mercury to Aeneas ordering him to leave Carthage immediately to complete his task. Aeneas departs and leaves Dido unconsolable. She dies of sorrow. The libretto is short, and the story is reduced to its essence: he comes, they fall in love, he leaves, she dies. The tragic events are interrupted by dances and comic intermezzi, however.
In staging this opera, Jan Decorte aspires to the same simplicity and abstraction that Purcell was able to achieve in his music.
Jan Decorte: ‘The story told in Dido and Aeneas is very simple, but the characters always sing the opposite of what they feel. Purcell opts for high comprehensibility, literalness and at the same time considerable ambiguity. It is always about that which it is not about. This ambiguity is also found in the music and I want to keep that. My claim is that you do not actually need ‘the big guns’ for opera. You can interpret the whole thing in a simple and abstract way as long as you believe in the abstraction and persist in it. In the whole spectrum of opera, I consider baroque as the peak of abstraction, in both libretto and music. I want to make something simple and have confidence that people will understand that abstract language of dance and music. All you need is people who can sing well and play well. What is normally expected from an opera is entertainment and great pomp and circumstance. In my simple approach I actually want to react against all the opera I have ever seen.’
The singers will therefore be at the heart of this performance: their singing will not be static but will be accompanied solely by gestures that are essential and are oriented towards the metre and rhythm of the music. The cast will comprise Dido, her confidante Belinda, a second woman, Aeneas, the sorceress and the witches. In addition, at the suggestion of the conductor Richard Egarr, the parts of the sorceress and the spirit will be taken by the same singer: the difference between man and woman will be made clear by the spirit’s part being sung in falsetto. Several members of the chorus of seventeen men and women will be called upon to sing the parts of the seamen.
Jan Decorte: ‘In addition, there is a special part for Sigrid Vinks as a sort of Cupid and master of ceremonies for the movement. She will literally put the singers – who spend the entire time onstage – in their place.’
Johan Daenen’s set depicts the cross-section of a golden room; the various changes of location are indicated by set pieces and placards. The orchestra is onstage. Jan Decorte: ‘It will all be very concrete, minimal and clear, because in fact the music tells it all. As far as I am concerned, it should be a chic, sublime evening with all the class of the court. Minimal, abstract and authentic.’